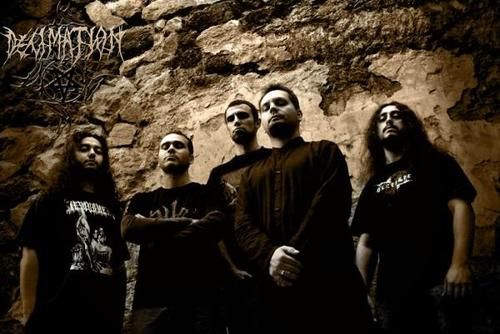 Born in the vacant universe
Lakamu, the predecessor of all snakes
He is the one, the ancestors of vile
Anshar, the master of skies
Kishar, the master of earth
Violation of the order has already begun
The earth and skies, all collapsed and amalagamated
Hail to Anum, Enlil, Ea!
Eternal silence has come an end
And the universe met with the clamour
Absu, eliminate those who had been created, those whom you had created
Absu, the colossal ancestor, the root snake's father
Since how long treason has been for Gods?
How could you dare Ea?
You martyred your patriarch...
What a might you have, you empyreal mother
What an impetus,
How could you give birth to such an army of darkness?
Tiamat!
He was the grandson of your man, who killed him
What a spite, what a fume?
Fear, you infinite universe
Fear, those poor remains of Gods
Supreme flame lord welcome not only the army of darkness
But the commander Kingu as well
The master of winds
Marduk!
Cut it into halves while he was near to devour with wrath
The purity which gives life to Cosmos
But also he began to create
Chaos which must be annihilated
and human in order to obey
But why from the blood of Kingu?