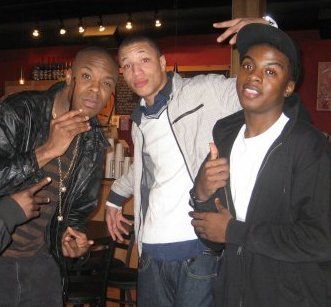 [Jesty:]
Now I can tell it by the look in your eyes
That you done came up here tonight
And you ain't lookin for guys
You're just chillin with ya girls
Tryin to have a good time
If you ever get inside
Did you look at the line?
Now you're lookin in my eyes
Tryin to show me a sign
Sayin that you're down to ride
Wanna slip in the side
Now you wanna pay attention
Cause I'm skippin the line
I pass by
Now you're slippin out the vision of mine
Get By, You'll be just fine hitchin a ride
Lookin to my right side
Women looking suprised
I stopped shy
Locked eyes
Then I took her out the line
Said "Hi, " stood by
Took a second to reply
Took her time outside
I could tell she was shy
Not I, Outright I was tryin to guide
Stepped aside, Let her stride then I followed behind
By that time I decided we should take it inside
So Let's Go.

[Chorus:]
Hey hey girl What ya name is
My name is J Beatz and I'm Famous
So let me show you how I do it
Don't believe me I can prove it
I ain't leavin til ya used to me [x2]

[Jesty:]
Once I step in the buildin
I see the people watchin every move
And all the women catchin feelins
Think I'm better than you.
Now you wanna stare me down like there's somethin to prove
But lookin round the room I found somethin better to do.
Only been around a few and I'm settin the mood
It's like your followin the cue that I set up for you
You should follow with your crew and get ready to lose
And pay attention to the dude that they're payin to view
Are you followin the message that I'm sayin to you
Or do I gotta slow it down or replay it for you?
I been known to clown around
And I ain't with u
Because I got a few things that I'm aimin to do
And I finally figured out why you're hatin the dude
It's cause your units don't move like you're playin with glue
You can fake it all u wanna what I'm sayin is true
Too many ladies in the room to be hangin with you.
So Let's Go.

Now I was under the impression that you know who I am
I'm J.B. the realest ever
Yea I do what I can
Got the teen magazines interviewin the man
If you wanna kick it with me
Yo you're losin your chance
You can help me figure out what to do in advance
I understand if you're busy
Don't ruin your plans
I don't wanna be ya man
I ain't makin demands
I just wanna be the man
You should gimme ya hand... and
All I wanna know is simply
If you wanna go with me
Maybe later on you can hit me on the low
And if you wanna roll with me
You should let me know since we
Barely had the time to even kick it at my show
Whoa
And ain't nothin to prove with me
You can just be cool with me
There's no need to move quickly
We can take it slow
So if you wanna holla back then holla back
Matter fact I ain't catch your name I forgot to ask.