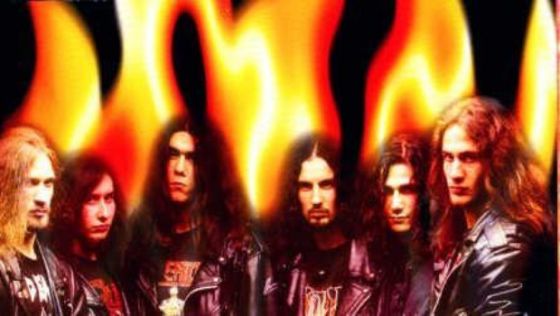 The Omen Came With The Storm

When mankind was young,
aeons and aeons ago,
on the face of the earth
something strange happened.

Wars and battles were the habit
and a warrior was doomed
to be immortal and strong
in the realm undergound.

And the armies marched
one towards the other
in the light of a deadly dawn.

Enemies looked each other, thirsty of blood
they fight for glory of their king and of their god
but none on the battlefield knows the awful truth
infernal are the signs that will soon cleanse the whole world.

Two armies, thousands men in the fury of war
blood is the veil of a land once peaceful now gore
swords of fire loaded with hate, scorn growing stronger
for all it's too late, the sun will shine no longer.

A distant thunder resounds as a warning for mankind
in the neverending glory of Agarthi death we'll find
even the sun is now bleeding and the twilight seems to be
coagulated on the altar of our rites
that once we made for thee!

Horses, running with diabolic force
lead their riders above
to spread death and to prove him.
Agarthi must remain unseen until the end
no survivors to tell again.
Signs, banners of the infernal realm
come out from the red clouds
to take the chosen one.