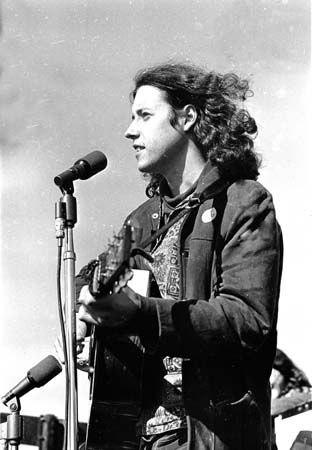 Now it all started two Thanksgivings ago, was on - two years agoon
Thanksgiving, when my friend and I went up to visit Alice atthe
restaurant, but Alice doesn't live in the restaurant, she livesin the
church nearby the restaurant, in the bell-tower, with her husbandRay and
Fasha the dog. And livin' in the bell tower like that, they got alot of
room downstairs where the pews used to be in.Havin' all thatroom,
seein' as how they took out all the pews, they decided that theydidn't
have to take out their garbage for a long time.

We got up there, we found all the garbage in there, and wedecided it'd be
a friendly gesture for us to take the garbage down to the citydump.So
we took the half a ton of garbage, put it in the back of a redVW
microbus, took shovels and rakes and implements of destructionand headed
on toward the city dump.

Well we got there and there was a big sign and a chain acrossacross the
dump saying, "Closed on Thanksgiving."And we had never heard ofa dump
closed on Thanksgiving before, and with tears in our eyes wedrove off
into the sunset looking for another place to put the garbage.

We didn't find one. Until we came to a side road, and off theside of the
side road there was another fifteen foot cliff and at the bottomof the
cliff there was another pile of garbage. And we decided that onebig pile
is better than two little piles, and rather than bring that oneup we
decided to throw our's down.

That's what we did, and drove back to the church, had athanksgiving
dinner that couldn't be beat, went to sleep and didn't get upuntil the
next morning, when we got a phone call from officer Obie.Hesaid, "Kid,
we found your name on an envelope at the bottom of a half a tonof
garbage, and just wanted to know if you had any information aboutit." And
I said, "Yes, sir, Officer Obie, I cannot tell a lie, I put thatenvelope
under that garbage."

After speaking to Obie for about fourty-five minutes on thetelephone we
finally arrived at the truth of the matter and said that we hadto go down
and pick up the garbage, and also had to go down and speak to himat the
police officer's station.So we got in the red VW microbus withthe
shovels and rakes and implements of destruction and headed ontoward the
police officer's station.

Now friends, there was only one or two things that Obie couldadone at
the police station, and the first was he could have given us amedal for
being so brave and honest on the telephone, which wasn't verylikely, and
we didn't expect it, and the other thing was he could have bawledus out
and told us never to be see driving garbage around the vicinityagain,
which is what we expected, but when we got to the policeofficer's station
there was a third possibility that we hadn't even counted upon,and we was
both immediately arrested.Handcuffed.And I said "Obie, Idon't think I
can pick up the garbage with these handcuffs on."He said, "Shutup, kid.
Get in the back of the patrol car."

And that's what we did, sat in the back of the patrol car anddrove to the
quote Scene of the Crime unquote. I want tell you about the townof
Stockbridge, Massachusets, where this happened here, they gotthree stop
signs, two police officers, and one police car, but when we gotto the
Scene of the Crime there was five police officers and threepolice cars,
being the biggest crime of the last fifty years, and everybodywanted to
get in the newspaper story about it. And they was using up allkinds of
cop equipment that they had hanging around the police officer'sstation.
They was taking plaster tire tracks, foot prints, dog smellingprints, and
they took twenty seven eight-by-ten colour glossy photographswith circles
and arrows and a paragraph on the back of each one explainingwhat each
one was to be used as evidence against us.Took pictures of theapproach,
the getaway, the northwest corner the southwest corner and that'snot to
mention the aerial photography.

After the ordeal, we went back to the jail.Obie said he wasgoing to put
us in the cell.Said, "Kid, I'm going to put you in the cell, Iwant your
wallet and your belt."And I said, "Obie, I can understand youwanting my
wallet so I don't have any money to spend in the cell, but whatdo you
want my belt for?"And he said, "Kid, we don't want anyhangings."I
said, "Obie, did you think I was going to hang myself forlittering?"
Obie said he was making sure, and friends Obie was, cause he tookout the
toilet seat so I couldn't hit myself over the head and drown, andhe took
out the toilet paper so I couldn't bend the bars roll out the -roll the
toilet paper out the window, slide down the roll and have anescape.Obie
was making sure, and it was about four or five hours later thatAlice
(remember Alice? It's a song about Alice), Alice came by and witha few
nasty words to Obie on the side, bailed us out of jail, and wewent back
to the church, had a another thanksgiving dinner that couldn't bebeat,
and didn't get up until the next morning, when we all had to goto court.

Came to talk about the draft.

They got a building down New York City, it's called WhitehallStreet,
where you walk in, you get injected, inspected, detected,infected,
neglected and selected.I went down to get my physicalexamination one
day, and I walked in, I sat down, got good and drunk the nightbefore, so
I looked and felt my best when I went in that morning.`Cause Iwanted to
look like the all-American kid from New York City, man I wanted,I wanted
to feel like the all-, I wanted to be the all American kid fromNew York,
and I walked in, sat down, I was hung down, brung down, hung up,and all
kinds o' mean nasty ugly things. And I waked in and sat down andthey gave
me a piece of paper, said, "Kid, see the phsychiatrist, room604."

And I went up there, I said, "Shrink, I want to kill.I mean, Iwanna, I
wanna kill.Kill.I wanna, I wanna see, I wanna see blood andgore and
guts and veins in my teeth.Eat dead burnt bodies. I mean kill,Kill,
KILL, KILL."And I started jumpin up and down yelling, "KILL,KILL," and
he started jumpin up and down with me and we was both jumping upand down
yelling, "KILL, KILL."And the sargent came over, pinned a medalon me,
sent me down the hall, said, "You're our boy."

Didn't feel too good about it.

Proceeded on down the hall gettin more injections, inspections,
detections, neglections and all kinds of stuff that they wasdoin' to me
at the thing there, and I was there for two hours, three hours,four
hours, I was there for a long time going through all kinds ofmean nasty
ugly things and I was just having a tough time there, and theywas
inspecting, injecting every single part of me, and they wasleaving no
part untouched.Proceeded through, and when I finally came tothe see the
last man, I walked in, walked in sat down after a whole big thingthere,
and I walked up and said, "What do you want?"He said, "Kid, weonly got
one question. Have you ever been arrested?"

And I proceeded to tell him the story of the Alice's RestaurantMassacre,
with full orchestration and five part harmony and stuff like thatand all
the phenome... - and he stopped me right there and said, "Kid,did you ever
go to court?"

And I proceeded to tell him the story of the twenty seveneight-by-ten
colour glossy pictures with the circles and arrows and theparagraph on
the back of each one, and he stopped me right there and said,"Kid, I want
you to go and sit down on that bench that says Group W .... NOWkid!!"

And I, I walked over to the, to the bench there, and there is,Group W's
where they put you if you may not be moral enough to join thearmy after
committing your special crime, and there was all kinds of meannasty ugly
looking people on the bench there.Mother rapers.Fatherstabbers.Father
rapers!Father rapers sitting right there on the bench next tome!And
they was mean and nasty and ugly and horrible crime-type guyssitting on the
bench next to me. And the meanest, ugliest, nastiest one, themeanest
father raper of them all, was coming over to me and he was mean'n' ugly
'n' nasty 'n' horrible and all kind of things and he sat downnext to me
and said, "Kid, whad'ya get?"I said, "I didn't get nothing, Ihad to pay
$50 and pick up the garbage."He said, "What were you arrestedfor, kid?"
And I said, "Littering."And they all moved away from me on thebench
there, and the hairy eyeball and all kinds of mean nasty things,till I
said, "And creating a nuisance."And they all came back, shookmy hand,
and we had a great time on the bench, talkin about crime, motherstabbing,
father raping, all kinds of groovy things that we was talkingabout on the
bench.And everything was fine, we was smoking cigarettes andall kinds of
things, until the Sargeant came over, had some paper in his hand,held it
up and said.

"Kids,this-piece-of-paper's-got-47-words-37-sentences-58-words-we-wanna-
know-details-of-the-crime-time-of-the-crime-and-any-other-kind-of-thing-
you-gotta-say-pertaining-to-and-about-the-crime-I-want-to-know-arresting-
officer's-name-and-any-other-kind-of-thing-you-gotta-say", andtalked for
forty-five minutes and nobody understood a word that he said, butwe had
fun filling out the forms and playing with the pencils on thebench there,
and I filled out the massacre with the four part harmony, andwrote it
down there, just like it was, and everything was fine and I putdown the
pencil, and I turned over the piece of paper, and there, there onthe
other side, in the middle of the other side, away from everythingelse on
the other side, in parentheses, capital letters, quotated, readthe
following words:

("KID, HAVE YOU REHABILITATED YOURSELF?")

I went over to the sargent, said, "Sargeant, you got a lot a damngall to
ask me if I've rehabilitated myself, I mean, I mean, I mean thatjust, I'm
sittin' here on the bench, I mean I'm sittin here on the Group Wbench
'cause you want to know if I'm moral enough join the army, burnwomen,
kids, houses and villages after bein' a litterbug."He looked atme and
said, "Kid, we don't like your kind, and we're gonna send youfingerprints
off to Washington."

And friends, somewhere in Washington enshrined in some littlefolder, is a
study in black and white of my fingerprints.And the only reasonI'm
singing you this song now is cause you may know somebody in asimilar
situation, or you may be in a similar situation, and if your ina
situation like that there's only one thing you can do and that'swalk into
the shrink wherever you are ,just walk in say "Shrink, You canget
anything you want, at Alice's restaurant.".And walk out.Youknow, if
one person, just one person does it they may think he's reallysick and
they won't take him.And if two people, two people do it, inharmony,
they may think they're both faggots and they won't take either ofthem.
And three people do it, three, can you imagine, three peoplewalking in
singin a bar of Alice's Restaurant and walking out. They maythink it's an
organization.And can you, can you imagine fifty people a day,Isaid
fifty people a day walking in singin a bar of Alice's Restaurantand
walking out.And friends they may thinks it's a movement.

And that's what it is , the Alice's Restaurant Anti-MassacreMovement, and
all you got to do to join is sing it the next time it come'saround on the
guitar.

With feeling.So we'll wait for it to come around on the guitar,here and
sing it when it does.Here it comes.

So we'll wait till it comes around again, and this time with fourpart
harmony and feeling.

We're just waitin' for it to come around is what we're doing.