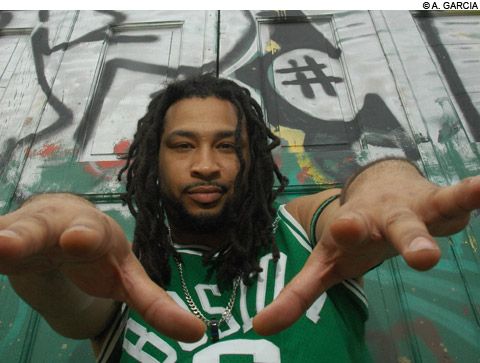 Hmm, yeah, unstoppable (Akrobatik, y'all)
Ayo, I was on the mike, location insignificant
Doing what I normally do, come on rippin it
Making fifty people feel like they was fifty thousand
Cooley promoted show, but Ak' was still housing
All of sudden in steps a crew
Acting shitty, all pissy off a liquor and brew
Interrupted on my set, straight disrespect
I had the crowd vibing lovely, now it's disconnect
This one cat was dumber than the crowd, straight acting
So I addressed him money since he was so distracting
Ripped him with a rhyme that made the crowd go nuts
Whole time Good Fella dropped the beats and cuts
And then this other brother stepped up from his crew
A thugged-out small fry, I called him Royce the Five Two
The people in the place, they would never go with him
They knew he lacked manhood and professionalism
By now niggaz should've went home in disgrace
But this little dogs still jumping up in my face
I let him rhyme about his guns, record deals and rings
Whole time knowing I could knock him out with one swing
But if I throw a punch and let this idiot push me
His man'll probably pull out the tool just like a pussy
Then its good people getting stabbed and shot, right?
All because some thirsty niggaz wanted the spotlight
Step back black, Ak' ain't the one
I'm on a mission, got no time to be dead or in prison
I'm trying to see every single ocean and continent
So your ignorance could never break down my self-confidence
If niggaz threw fair ones like niggaz was men
I might get in a scrap every now and then
But since niggaz is dirty and they mentals are frail
I walk away in New York cause cooler heads prevail
I mic a fight but don't sleep the head skills is tight
So don't be the one to break my peaceful streak, aight?

Now all I'm thinking about is strangling the show promoters
Who shoulda hired bouncers instead of chauffeurs
You might think I'm soft for not fucking up the place
But all I care about is everybody got home safe
You can thank Freestyle and Stronghold for that
They my niggaz for life, yeah they all have my back
Shoulda seen when I was trying to ask the crowd to pardon this
And this dude's screaming on the mic "Yo we sign artists"
I see exactly why these labels sing y'all
Cause they make the dough while your weak minds fall
And as for shorty he was fowled no doubt
Dude snuffed a honey in the grill on his way out (say what?)
Ill, right?
But he didn't get far
Twenty minutes later he was in the squad car
I felt bad for his poor lost soul
Niggaz fucking up while they on parole
A little bit a shine in front of Fifty ain't worth it
But that's America, plenty nigga's brain short-circuit
If your plan for the night is fucking up my show
Then I think its time to revaluate your goals
A lot of brothers be inside the mental cage
I couldn't believe when I found out his age (twenty-?)
Now I'm off to Jamaica and he's off to jail
Proof once again that cooler heads prevail
I mic a fight but don't sleep the head skills is tight
So don't be the one to break my peaceful streak, aight?