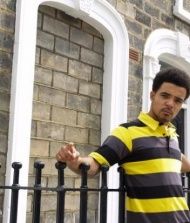 Nigger listen, when i spit on the riddem, I kill em,
raw like the Ball of Brazilians,
you don't want war, cor the kids brilliant,
blood, I'm the heir to the throne,
not William, Akala, smart as King Arthur,
darker, harder, faster,
rasclaat, I kick the illest shit,
it's like Shakespeare, with a nigger twist,
lyricist, im the best on the road,
nitro flow, oh-so-cold, I'ma blow yo,
keep the hoes, I only want dough homes,
nobody close, I'm alone in my own zone,
no no love for the po-po,
loco when I rock mics solo,
I hope that you know, where you don't go thoe,
want it with Bolo? Must be coco,
its William back from the dead,
but I rap bout gats and I'm black instead,
it's Shakespeare, reincarnated,
except I spit flows and strip hoes naked,
no fakin'-test my blood bruv,
its William, back as a tug cuz,
so real the shit I kick now,
plus I don't rite, I recite my shit now,
straight from the top, expert timin'
on top of that now, the whole things rhymin'
no more tights, now jeans saggin'
if I say so myself, I'm much more handsome,
don't ever compare me to rappers,
I'm so quick-witted that I split em like fractions,
my shit, I tell em like this...
It's like Shakespeare with a nigger twist...

I'm similar to William, but a little different,
I do it for kids that's illiterate, not Elizabeth,
stuck on the road, faces screwed up,
feel like the world spat em out, and they
chewed up,
it's a matrix, I try and explain it,
but on a real thoe still ready blaze em,
no contradiction just face it,
they so enslaved, they are worse than a agent,
I grace stages, sharp as razors,
don't get cut cuz, keep ya distance,
no artillery, tryna' be militant,
ya'll dudes killin' me, think that ya killin' it,
its embarrassing watchin you babblin,
keep spittin ya darts, mine is javelins,
the hood Tiger Woods too milly,
number 1 for so long, its just getting' silly,
shit kinda like Bruce wit da knuckles,
like the first time ya ever saw Ali shuffle,
you don't trouble, left layin in a puddle,
bruv you are havin a bubble,
ima whole different kettle of fish,
thou shall not fuck with dis,
my shit, I tell em like this...
Its like Shakespeare with a nigger tiwst.

To be fair, no MC close to the man,
little just come yout's jumpin out of they pram,
everybody badman, behind a mic stand,
its not creative, one bag of hype, and
if you buss a ting, where's the mash?
Move so much food? Where's the cats?
These dudes ain't real, they just rap,
I don't spit what I don't know,
Just the facts,
no talks of rocks I ain't sold,
shots I ain't blown,
my business ridiculous,
sick with it, quick witted,
companies head to head an liquidate it,
welcome to illa state, meet ya fate mate,
talk truth but we don't play games,
move sick, look sample techno,
never pull a ting, if it ain't gonna let go,
that's that, rap track,
clap ya like a black gat,
back chat, crack back,
I'm the nigger, that's that,
the rest of these kids is irrelevant,
don't compare me to him,
that's just beggin' it,
im on my own shit,
dicks ain't spit,
its no democracy, dictatorship,
so dicks hate my shit,
im sick, raise ya spliff,
im swift, blaze em quick,
my hits, major shit,
I flip phrases quick,
my sick razor shit,
give thick grazes quick,
and chicks say he's cris,
its not a rumour,
that kid Akala,
no not "Ack-a-la", beg ya pardon,
don't get it twisted,
your on the sideline like a mistress,
I'm the whizzkid, with the sick shit,
my shit, I tell em like this,
it's like Shakespeare, with a nigger twist.