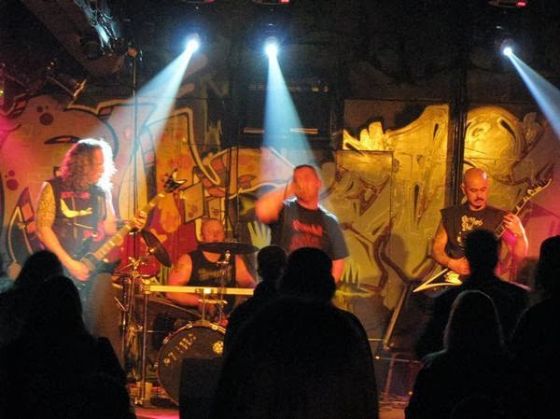 There is a time in the land of the mortals. they
Divide and fall apart. wielding swords, hand in hand
As blood flows from their hearts. death and glory is
What they see. they will fight to the end until every
Last one is dead. only the brave are victorious, hate
And anger is in their eyes. merciless fate is upon us.
You fools never realized your pathway is destruction.
Warriors stand side by side, one be one they will die.
A brother known as an enemy will lead a trail of
Misery. the lives of agony and bludgeon. pain god
Controls the weak. to kill or be killed on the fields
Of despair. powerless to pains control, swing of the
Axe, the final blow. off with their heads, they will
Die. only your fleas will mourn you. the ground is
Bloodstained red, the fields are covered with the
Dead. onward to battle, they will go. a warlord with
His shield and sword. hear them cry, watch them die,
Ending life, dark endless time. on the hills of arcus,
One by one they will go. on their conquest they will
Stride. a challenge of strength and might. no one can
Enslave us to an order of worthlessness. it's time for
Death and in life we will rise. ending life, dark
Endless time. crush the feeble ones, weakling
Siblings. on their hands and knees pleading for mercy.
Begging for their life, put them to death.
Sorrow-filled tearful eyes, joyful suffering.
Terror-filled hearts, fear is the killer. swords of
Blood in our hands. a war of brothers, fools who are
Blind. conqueror among conquerors, a warriors tale.